HomeNoticiasNewsIntermepro strengthens its position in the... 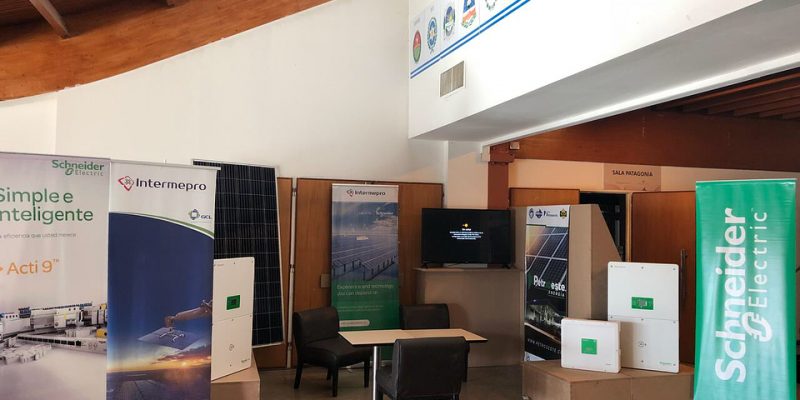 After completing small scale projects all across the country, the company gears up for new renewable generation ventures. In addition, it aspires to exceed 25% market share in products for the sector, being a representative of brands such as Schneider Electric, GCL, Betta Bateries and Tigo.

Having more than 28 projects in execution, Intermepro is gaining ground in the Argentinean market. Among those, 5 are on the municipal and provincial level, while the rest are corporate in nature.

Intermepro has been chosen by companies such as YPF, Coca Cola, IRSA, La Segunda and La Caja de Ahorro y Seguro for their sustainable power generation and air conditioning needs in their offices and other locations across 12 provinces.

Intermepro’s expansion plans include tackling its own large-scale developments, and increases in market share as a provider of energy solutions and services, and as supplier of renewable energy gear.

“We have a ready-to-build 300 megawatt project fror RenovAr 4, and we’re in talks with several leading firms to this effect” Intermepro commercial director for LATAM Gonzalo Luoni announced exclusively to this medium.

It bears repeating that Intermepro has a large number of exclusive representation agreements in Argentina with leading electricity companies and strategic partnerships with international suppliers in the solar sector.

“We’ve also to consider a product sales volume in Schneider Electric inverters and GCL panels in Argentina of around 4MW, a figure similar to our 2019 volume in generation projects for the public sector, self managed corporate projects, and third-party projects” Intermepro’s commercial director for LATAM specified to Energía Estratégica Argentina.

Hence, as representative of international suppliers, the company’s aspirations of a higher market share.

The company intends to offer top of the line products with international backing and the best prices per installed watt in the market.

Looking forward to MiniRen, Intermepro gauges alternatives to become an important supplier to winning bidders and a provider of engineering support for new projects in the nation.

Intermepro also considers distributed generation a highly relevant topic, and is at work developing its own network of more than 25 distributors and a wholesaler such as Solution Box, with the inclusion of provincial or regional energy distribution companies.

With regards to this plan, the company finds great importance in securing financing deals with large banks. “Concerning this case, an announcement will be made in the coming weeks that will be of great significance and will bing innovations into the market” put forward Intermepro’s Gonzalo Luoni.